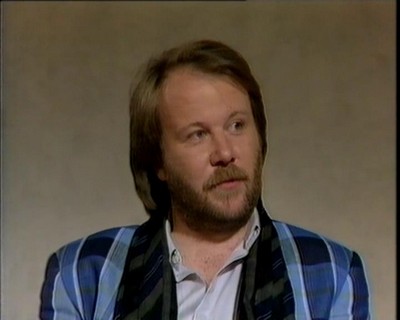 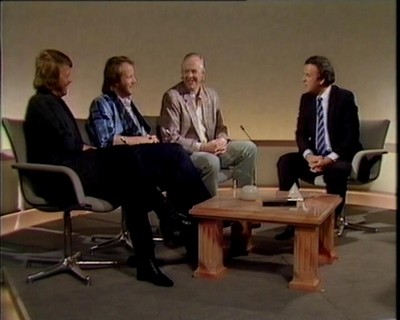 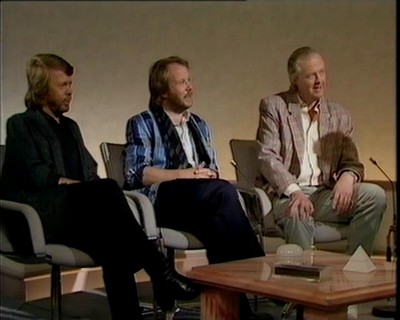 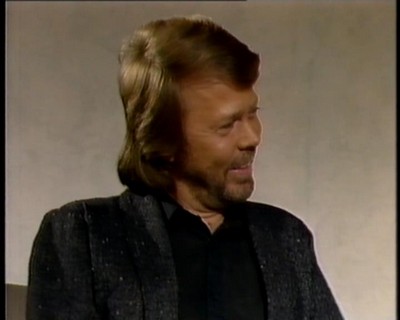 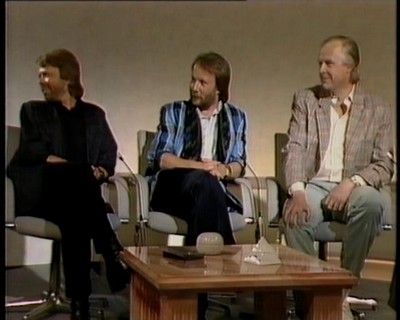 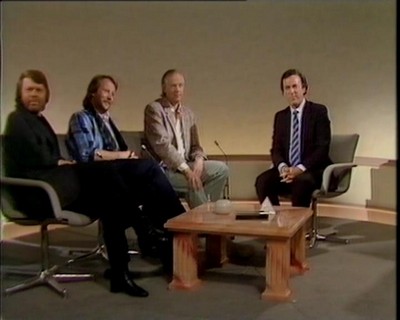 Other guests on the show that night were actress Fiona Fullerton and actor Roger Moore (presumably promoting the Bond film A View To A Kill) and skating superstars Torvill & Dean.

Click here for a TV listing from Leidsch Dagblad - 10 June 1985, p.16 (note the listing is in CET so the UK time would be one hour earlier).

Benny in a grumpy mood - he says three lines in the whole interview.

Terry Wogan: Tonight I have the writers of a show, which has more credentials than the American ambassador! The words are by Tim Rice, whose credits I will not trouble you with and the music is by two of the most successful songwriters of the past ten yeas as ABBA - Björn Ulvaeus and Benny Andersson. Ladies and Gentlemen, Björn, Benny and Tim - you all know them, you all love them!

TW: Thank you all for joining us. It's not easy to interview three people you know!
Björn Ulvaeus: We know that!
TW: What's the Swedish for Chess?
Björn: "Schack"
TW: Like the Irish "Paddyhwack" I suppose?! It's a funny subject for a musical though isn't it?
Tim Rice: Maybe. but people always say that about the musicals that I have been involved with. But what is an ordinary subject for a musical? What would you expect the kind of subject you expect to be done to be?
TW: Oh, I don't know - cats, trains, roller-skates, you know ordinary stuff!  (laughter)
Björn: Jesus?
TW: Jesus, yes... And Evita Peron ... normal everyday occurrences.
Tim: I think it's a very good idea for a musical
TW: Of course you do - you wrote it! Whose idea was it in the first place then?
Björn: It was Tim's idea. We met at the end of 1981 and he had that idea already. Both Benny and I were really intrigued by it. It was so weird and strange and had such appeal to us.
TW: Benny, were you casting around for a new role for a new musical?
Benny Andersson: For us we had never done a musical before, so this was the first real chance for us to really get our teeth into it. we had been talking about it, Björn and I, while we were working with ABBA and then Tim came in.
TW: Who had the first idea Tim? Did you put it to Björn and Benny or was it the other way around?
Tim: Well I had about five or six ideas for shows that I might do one day and indeed still have. On the list was "Chess" and when I heard the boys were keen to write something I was enormously enthused, because I was a great fan of theirs - and still am I hasten to add!
TW: Even after all these years of working together?
Björn: Yes, strange but true!
Tim: So I took these four or five ideas to them and the one they chose was "Chess". It's quite possible that if they had't liked it, "Chess" would never have happened. In fact it's almost certain.
TW: The accepted route it appears to be now for a musical is for the album first followed by a live performane and then you take it into the theatre. It worked for you, of course, with Jesus Christ Superstar.
Tim: Well, it's like an out-of-town run in way. You are testing the market and I think these days with the record business, one has to be quite brutally frank about this, is actually much more important than the theatre business in terms of the number of people you can reach. I think if you ignore the record business and the vast audience that loves records, you are perhaps going to be slightly out of touch with what is going on today.
TW: And the money?
Tim: Well I don't know. In fact you don't make so much money out of the record as you do out of the theatre if you have a hit show. The costs of the record, particularly when you have to flog over to Stockholm all the time to record it!
TW: (tongue in cheek) did they give you your expenses every time when you went over to see them in Sweden?
Tim: This is in dispute - our lawyers are talking about it! I made 41 stripes to Stockholm.
TW: When they don't want you know what's going on, I suppose they go off into a corner and speak Swedish?!
TR: All the time, yes.
Björn:Yes, it's a great privilege we have!
TW: Are you learning any Swedish?
Tim: I've learnt four or five words.

(Terry tries out his Swedish pronunciation ....)

TW: Do you mean to tell me that my Swedish is wrong after all these years of Eurovision Song Contests?
Björn: Yes it is!
TW: Blast! Somebody said to me that the music of Chess seemed very like Gilbert and Sullivan. Has anybody anybody else said that to you?
Benny: Yes.
TW: Oh I thought it was an original idea. Predictable again, eh?
Tim: I think the first song is a deliberate pastiche, but the rest of it isn't . I don't think that Arbiter is much like Gilbert and Sullivan.
TW: Who is in Chess?
Tim: Well on the record we have got Elaine Paige, Murray Head and Tommy Körberg. there is every possibility that people on the record will perform on stage. Elaine is going to play the female lead but nothing else is set.
Björn:  We are very, very happy about the director, Michael Bennett, who has decided that he wants to do ti it. He directed Chorus Line and Dream Girls - a wonderful man to work with.
TW: When are you going to fling it open to the great British public then?
Tim: As soon as poss, which means that we hope to start rehearsals in January 1986. We've got six months to re-write some bits.
Benny: Tim has to re-write a lot!
TW: Yes, did you find that that was the weakest part of the whole lot - the lyrics?  (laughter)  Did you give Tim much of a hand with the lyrics, Björn?!
Björn: Well I wrote dummies, which are not quite dummies always.
Tim: He used to give me lyrics which were meant to be nonsense lyric, but they always had wonderful lines in them which I was able to nick and save myself many hours of pain. In fact I have been congratulated so many times on my genius in writing "One Night In Bangkok makes a hard man humble" - I have been told by so many people that this was a complete summary of my brilliance - but Björn wrote it!
TW: Now it can be told! We wish you luck when it does open next year.
Björn: February or March 1986, yes.
TW:  I'm sure it will be a great success. I hope so anyway.