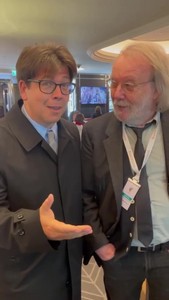 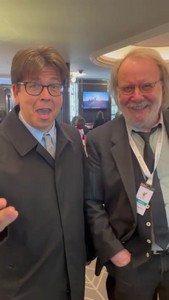 London football club, Tottenham Hotspurs (commonly referred to as just "Spurs") have a new signing from Sweden in the form of national Swedish football star, Dejan Kulusevski, who was on loan from Juventus (Italian football team).

On Tuesday 10 May, Spurs' social media platforms posted this short video of British comedian Michael McIntyre singing a football chant with Benny to the tune of Gimme! Gimme! Gimme! (A Man After Midnight) with the tag-line, "The duet you didn't know you needed... Michael McIntyre and ABBA's Benny Andersson".

Apparently football fans have been chanting this for Dejan Kulusevski for a while with the following lyrics:

Gimme, gimme, gimme a ginger from Sweden
He came from Juventus,
And he plays on the wing

Gimme, gimme, gimme a ginger from Sweden
Number 21
His name is Kulusevski

Where this was filmed and when I do not know.

This whole thing confused me at first because Tottenham Hotspur and Arsenal are both North London football clubs and fierce rivals.  It is known that Benny is an Arsenal supporter so why would he be joining in for a Spurs player?   Probably because he's Swedish and plays for the national side, but what do I know?  I am Just A Girl.

Thanks to Anna Mailer c/o ABBAtalk.